Learn the History of the Glassblowing Technique

The lustre and versatility of blown glass has captivated the world throughout centuries. The glamour of these glass pieces has fascinated people from all across the globe. The professional glassblowers spend endless time in creating magnificent art from blown glass and are recognized internationally for their signature work.

1) Modern Glass blowing technique is an extremely interesting process, which involves inflating molten glass into a bubble with the help of a blow tube.

2) Free blowing method has had a firm place in the art of glass forming right from the 1st century till the late 19th century. This process involves blowing a puff of air into molten glass, which has been spooled at one end of the blowpipe. This forms an elastic skin on the interiors of the glass blob.

3) Mold blowing was used as an alternative technique to shape glass objects during the first part of the second quarter of the first century AD. It accelerated the production and the distribution of glass objects as it mainly produced mold blown vessels and utilitarian vessels.

The process of glass-blowing

When a glassblower is shaping his piece, he starts heating it up at above 1000 degree F, in the glory hole. Then he adds colour from various powders to create different patterns and styles in the piece. He keeps the piece on the blowpipe while rolling it over the colour.

The glass has to be heated to melt the colours, and the edge of the pipe is held by the artist to make sure the shape does not get affected. When they start blowing puff on the end of the blowpipe to create a bubble, there is constant motion to get the desired shape and then they put it in the glory hole again to get the flawless shape.

This procedure is repeated many times. After getting a satisfactory shape, it is transferred to a punty, which works as the bottom of the piece. When the time is right, the artist stops turning the piece and raps the blowpipe as it breaks away leaving the piece attached to the punty.

To open up the vessel, the heat of the glory hole is used to create patterns and shapes. The blower then takes the punty and hits it firmly so that the piece drops off into a box, which has thick layers of fire blanket. Afterwards, it is transferred to the annealing oven to cool down and the hot piece is cooled slowly to avoid crackling of the piece. 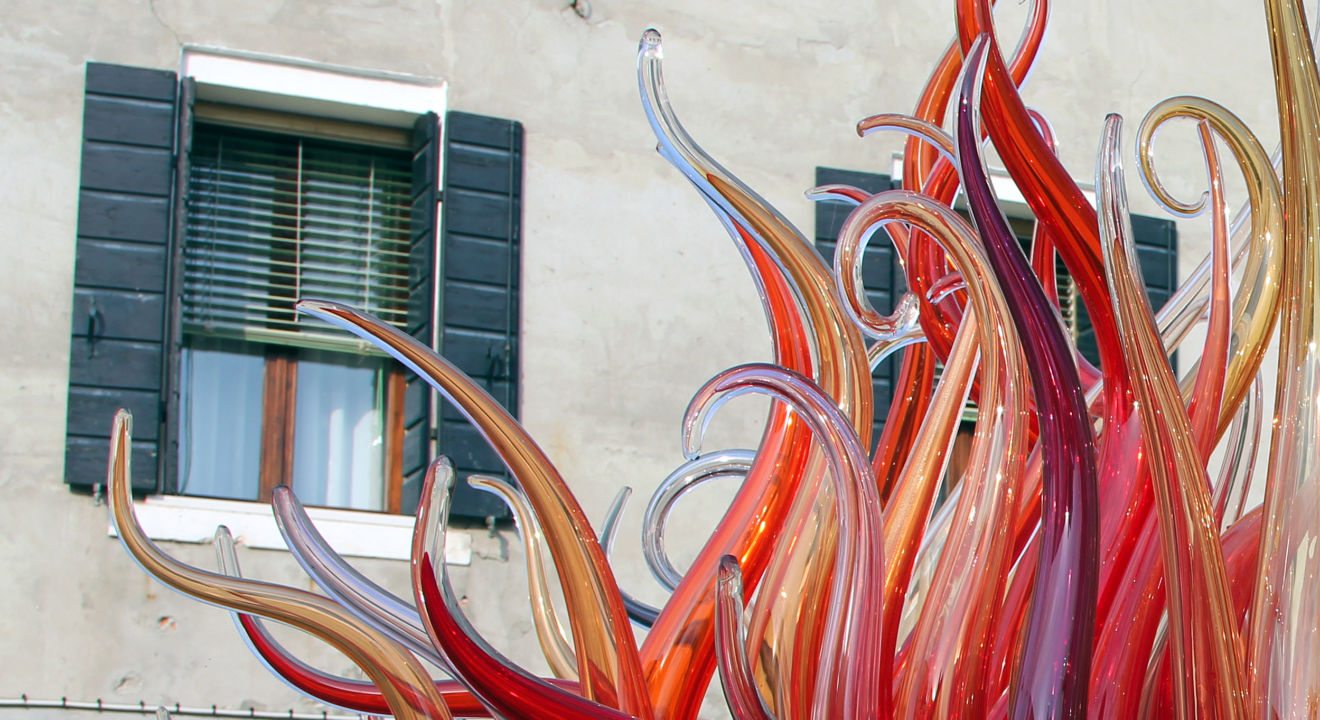 This procedure is time consuming and demands a lot of patience. If one does not work effectively, it can lead to dangerous results. Artists struggle in getting the right shape out of the annealing oven, as the glass mostly breaks if proper care is not taken.

Murano, the glass island of Venice is a collection of seven individual islands all linked together by bridges. The Roman initially settled it in the 11th century, a grand council like that of Venice ran it and later in the 13th century, it was governed by a Podesta from Venice.

Unlike other islands in Lagoon, Murano had grown into an exquisite trading centre with its own coins, police force and commercial aristocracy. This island bloomed through its salt production and its fishing port. In the second millennium, the hermits of the Camaldolese Order occupied one of the islands where they found a renowned monk; Fra Mauro who stayed at the Monastery of St. Michael, which later became the hub for learning and printing.

The French forces under Napolean suppressed this monastery in 1808 and expelled the monks in 1814 because of their conquest of the Italian Peninsuala, which is when the grounds became Venice’s main territory.

In 1291, the Venetian Republic ordered glassmakers to move their foundries to Murano because the glassworks represented a fire danger in Venice, as their buildings were mostly made of wood. That is the major reason why Murano glass is associated with Venetian glass.

Murano’s glassmakers were the most prominent citizens on the island. They enjoyed the thrill of wearing the swords, lived a life of luxury and had the privilege to not get prosecuted under the laws of Venetian state. However, by the late 14th century, the glassmakers’ daughters could marry the tremendously rich men of Venice but the artisans lacked the freedom in their work, as they were forbidden to start their shops in other regions or leave the Republican.

The Murano glassmakers were unique because of their complex designs, which were executed intelligently. They were the rare ones in Europe who knew how to make glass mirrors. They redefined technologies which included crystalline glass, enamelled glass (smalto), glass with threads of gold (aventurine), multicoloured glass (millefiori), milk glass (lattimo), optically clear glass and imitation gemstones made of glass.

The Republican lost its monopoly by the end of the 16th century even though Venice tried hard to protect the secret of the production of glass and crystal as some glassmakers shared the unique techniques with the European countries.

Today, Murano has attracted many tourists who visit this island mainly to watch the glass making demonstration and even buy a subtle yet magnificent art made of glass. It owns most famous brands of glass in the world like Venini, Alessandro, Murano, Barovier and Toso, Simone Cenedese and Seguso.

The famous Glass Museum in the Palazzo Guistinian flourished in Murano, it has a history of glassmaking and glass samples representing Egyptian times through their latest designs. Many of the fornaci (glass factories) offer demonstrations for the visitors and attract buyers with their antique craft.

Museo del Vetro is a world famous museum in Murano, which solved many purposes over the time after Murano was annexed to Venice in 1923.  It displays a fascinating glass collection from the Egyptian times.

Check out our magnificent glass collection on Mansionly.

Mansionly Interior Designers | How We Work

Renovating your home or office? Connect with our industry experts today!